Some of Our Volunteers....

We have a wonderful group of very dedicated volunteers that run our Railway, without them, we simply wouldn't be able to operate the Railway for our visitors.

Our volunteers vary in age from the youngest at around 12 to the oldest at somewhere nearer 80. They come from all walks of life, we have school childen, builders, IT managers, mechanical engineers, members of the armed forces, council workers and a number of busily retired members.

If you're interested in becoming a member and volunteering for us, take a look at our Membership page for contact information. In the mean time, here's a selction of some of our volunteers.

Mick was born in Hurstpierpoint and went to school there and in Hassoks when the family moved. He completed his technical education in Brighton.

His first job was a temporary postman delivering Christmas mail. Shortly after that he saw an advertisement in the local paper by South Eastern Gas Board for apprentices. He applied and was taken on in January 1963. He worked as a gas engineer until he took voluntary redundancy and became self-employed.

Mick married Heidi (who also volunteers at the Railway) in 1963 and they have two children, Clarrie and Henry.

Having a interest in railways from an early age and a Hornby Dublo model railway, going to school in Brighton Mick took a keen interest in Brighton Shed and used to go there on Sundays, climbing into the loco cabs and, occasionally, being allowed on the footplate while the engines were moved.

Mick has had a long history with the Bluebell Railway. With four school friend he was there in 1960 when the railway opened and helpded out in the car park. He became a member in 1961 working in the Carriage and Wagon shop until 1981 when Mick joined the Loco Department and was passed out as a driver in 1988. Since then he has driven all of the Bluebell's engines and also visiting engines. In Easter 2017 he was delighted to be able to drive Flying Scotsman on its much-publiscised visit to the Bluebell. His fireman as none other than Heidi!

Mick has driven at a number of railways including Kent & East Sussex Railway, the North Norfolk Railway and at Wolsztyn in Poland. In the early 1980s Mick called in at the Lavender Line, where he met Paul Cowlin (CME) and Chris Knibbs. Chris invited Mick over to Pulborough when our Railway ws first established and Mick became a member in 2000.

When asked what his other interests were, Mick replied that he was a collector. he has 6 vintage tractors, 2 old Land Rovers, a 1951 Fordson van and his 4" Foster traction enginer. He still has his fairground bits and pieces (which you can usually see at our Teddy Bear's Picnic), and he enjoys selling roast chestnuts at Christmas! 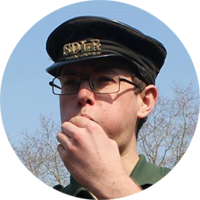 Peter was born in Chichester but now lives in Bognor Regis. He went to School in Westergate, then college in Chichester, studied Public Services and works for the council as a waste operative. When Peter was young he had trouble learning at school, this was the start of his journey to being diagnosed as Autistic, having Asperger's Syndrome. He says that he does not let that stop him from doing the stuff he loves, ie. volunteering or building plastic models.

Peter attributes his love of railsways to his late Grandad, who introdcued him to a preserved railway in Swindon called the Swindon and a Cricklade Railway. Peter used to spend a lot of his school holidays there until his Grandad passed away in 2009. He kept going to Swindon up to for a few more years, but his Nan couldn't keep making the 2 and a half hour journey, so his days of smelling the smell of steam and diesels was over, or so he thought.

Peter had a few years away from railways but was missing it, so he started to look for a railway with steam closer to home, which is where he came across the South Downs Light Railway, In March of 2014 he made a visit, where I was greeted warmly, had a tour of the railway and made to feel very welcome by the volunteers. He filled out the application form, went home to get his parents to do the bits he couldn't and then the following week he returned with his form, and was being trained as Station Master. Peter is now a trainee driver for steam, and I can drive our resident diesel "Arun". It is an honour to be part of a great society, creating memories, and making people laugh and smile.

Peter has a few other interests and hobbies inlucding railways, model railways, model planes and helicopters, model boats and model buildings. Lately he has been working on a Battle of The Somme diorama. Peter is also interested in the fire service, and between 2013 and 2014 he was a West Sussex Fire Cadet with West Sussex Fire and Rescue at Bognor Regis Fire Station.

One thing Peter believes strongly is that you can do anything, if you put your mind and heart to it, doesn't matter what your abilities or inabilities are, and don't let anyone pull you down. 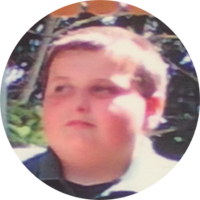 Herby has been volunteering at the Railway since he was 13 years old. Working with and learning about the railway has been Herby's hobby. Next year he is going to college to study tourism and UK visitor attractions as his career path and vocation. Herby say's that he will always hold a special loyalty with the Railway as the place where he has gained experience and knowledge from like minded colleagues, who share his interest and enthusiasm.