All the Latest News from South Downs Railway

This year's work weekend sees us start a major task, that being to remove the bridge by the swimming pools, re-align the track and then rebuild the bridge.

The issue here is that by re-aligning the track, it changes the curve and therefore moves the track away from the platform at Hardham Halt. This means that a lot of the undergrowth needs to be removed too to make way for the new track before we can then extend the platform at Hardham Halt, which will then give more room on the platform for when it becomes "North Pole", where there is always a crowd of people either waiting to get to see Santa, or waiting for the return train from the North Pole.

Pictures in the gallery here show the old bridge being dismantled, the new bridge starting to be constructed, clearance of some of the undergrowth, and the new bridge with some rail laid on it.

We're proud to announce the visit of 4498 Sir Nigel Gresley from Eastleigh Lakeside Steam Railway for our annual Steam Gala, running over the weekend of 25th, 26th and 27th May. with each day will see at least 3 trains running.

Sir Nigel Gresley was built by William Kirkland in 1964, at which time he ran her at Thoresby Hall in Nottinghamshire from 1966 to 1988. During the 1990s Sir Nigel was based at Stapleford Park, Leicestershire. After William's death in 2001 the engine was sold by auction at Bonhams to two members of The South Downs Light Railway, from where Eastleigh Lakeside Railway purchased her in August 2003. Since then the team at Eastleigh have taken over 5 years rebuilding and converting to 3 cylinders, finally putting her back into service April 2009. 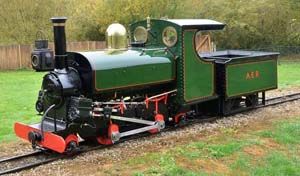 March saw the start of the new running season at SDLR, along with the Annual General Meeting on 23rd March, during which all statutory business was transacted with the adoption of the Directors' Report, the annual accounts and a resolution to dispence with a formal audit. The Treasurer reported a very successful year with a healthy balance sheet and the Chairman was able to comment on another year of healthy traffic and good special events.

Elected to the Board were Crispin White and Julian Chivers, who take the place of Peter Taylor and Alan Jackson. A big thank you is expressed to both gentlemen that have served for a number of years on the Board of Directors.

During the AGM, the Steam Guage Trophy was presented to Herbie Greasley, recognising all of the hard work that Herbie puts in to the railway. Almost every weekend you can find Herbie at the railway, either performing his rostered duty, or more than likely, filling in for someone to cover their shift. It is very much appreciated, along with all of our other volunteers hard work.

Also in March we saw the arrival of "Agapanthus", a locomotive owned by Alan Eatwell. Agapanthus was purchased as part of the auction of Lord Braybrooke's locomotives from Audley End. She needs a bit of work completing, but that is well under way and we hope to see her running on the railway very soon. More information can be found in our Locomotives section of the website, where an image gallery will be created when we have some photos of her in action.

Truly amazing progress (as can be seen here) with the re-railing project over the last few days, digging new route with plant one Thursday, followed by hardcore, new sleepers and rail for about 80% of the new track, now just the new crossover to build & ballasting to go!

December finds a lot of Santa's helpers visiting the railway to help prepare for Santa's visit.

July 2018 - (Re)Installation of the turntable

May 2018 saw the whole country celebrating the marriage of Price Harry to Meghan Markle. It was a very hot sunny day, and we too celebrated the wedding with our own special headboard for the happy couple!

Regular visitors could not fail to notice the changes to Stopham Road Station. (If you've not, click here for an image gallery!) The water crane positioned between the tracks always concerned us, not just becuase of the risk of impact with one of the narrow gauge locos if it was not returned to position, but also the fact that passengers could easily reach the arm and grab it.

Extending the platform has been an aim of the Railway for many years. Initially it was impossible because of the old access to the swimming pools, but once this was closed there was room for about 15ft of extra platform. The next hurdle was the insulated joint activating the crossing and the starter signal. The track replacement programme in Feburary 2018 gave us the ideal oppurtunity for the insulated joint to be moved, which was easily achieved by the S&T gang. The final problem was the starter signal which was on a gantry with the inner loop signal. Simply moving the signal back was not practical becuase of the curve making for poor visbility. The S&T Gang put their thinking caps on and came up with the ideal of splitting the gantry signal in half, leaving the inner loop signal where it was and placing the starter signal at the end of the platform.

The Society's Annual General Meeting was held on Saturday 10th March 2018 at Hardham Halt. The usual statutory business was transacted with the adoption of the Directors' Report, the annual accounts and a resolution to dispence with a formal audit. The Treasurer reported another successful year with a healthy balance sheet and the Chairman was able to comment on another year of healthy traffic and good special events.

Steve Johnson was elected to the Board. He takes the place of Julian Chivers who has served the Society as a committeeman and Director from the earliest days. Thank you, Julian for your past service.

This years' Steam Gauge Trophy was awarded to John Holmes for his consistent hard work as the Socitety's Treasurer.

In the cold wind of February we started our work weekend. The plan was to replace 3 or 4 panels of the older track, starting from the new track on the front straight heading back towards the station.

Thanks to the "heavy gang" that work on Sundays for us, we managed to surpass the station and replace track all the way back past the level crossing to garden centre. It meant that we had to build a new level crossing, but we were happy to live with that minor inconvenience!

The plan now for the work weekend in October is to start at the other end of the front straight and work round Windmill Curve towards the diamond crossing.